The Frog is Dead

Perhaps you thought that my title was metaphorical. It is not.

Today, my children discovered that our anorexic frog had died. He may have been dead for quit some time, but today was the day we discovered his passing.

Noah and Chloe held his funeral service and created a headstone for this “beloved” family member. (they go to public school, so they’re still learning to spell) They also named the frog this afternoon. Previously, he had been affectionately referred to as “the frog,” but today he received an official name: Jason Timothy Milam.

After the funeral, they resumed their digging and tree climbing.

I guess, now we can take the frog’s easter basket back. 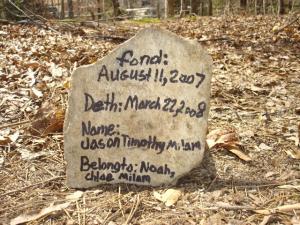 I'm about half way through this book. (was recommended by my friend Jake Nelson who is planting Response Church in Indy) So...