Here is a small photo set of the 5 billboards that are up now. I’ve had a million people asking me what all the billboards look like and what they say…well, here they are! 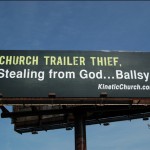 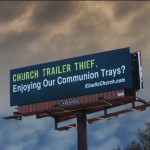 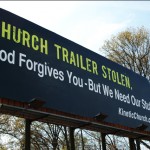 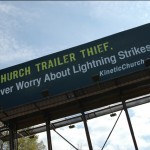 Ever Worry About Lightning Strikes? 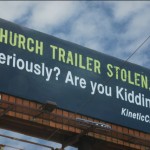 Seriously? Are you Kidding Me? 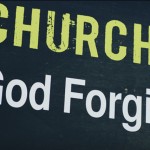 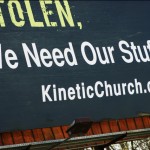 To Those Who Stole Our Stuff

[…] clip – click below, and pray that the thief sees and responds!  Check out the billboards here.YouTube Message to Trailer […]

[…] about what they are doing to try to recover the trailer and its contents. The campaign includes billboards and YouTube videos emphasizing forgiveness and the importance of the trailer to their ministry. You […]

Amazing. I love it. God Bless!

I think that they are being a bit dramatic.
The video with the music in the background sounds
like the kind of thing I’d see on TBN with the big haired preacher playing to the organ about how “if we just come to Jesus RIGHT NOW” then all will be forgotten. It comes off sort of creepy and although ONE of the intended recipients of the billboard/video is the person/s who stole the trailer, it is MORE THAN OBVIOUS that they are advertising their church in a unique way to Charlotte. I don’t disagree with unique, but this is desperate-unique, not unique-unique.

Matt, your comments are so thought provoking! I’m sure that you in your infinite wisdom would have handled things differently, in a more personal and genuine way, like sitting behind the safety of a computer screen criticizing, while eating cheetos and telling your mom that you’ll be off the internet in, “just 5 more minutes!”

And wow, you picked up on the fact that they’re “OBVIOUSLY ADVERTISING.” That’s sharp! I would never have equated billboards to advertising.

Unfortunately some of us seek after a guy who was both desperate and dramatic… So keep throwing stones. The rest of us will be out “RIGHT NOW” delivering a message we know as truth.

Well, I started out looking at the site with regard to the billboard, and posted probably a slightly harsh message without that intent. I stumbled into this thread, and again going someplace that is none of my business, read the post from Jake above.

Jake, while I can appreciate the fact that you guys were robbed, and probably feel somewhat violated, and I can honestly say I am unable to put myself in Kinetic’s shoes. However, it is a time like this when people need to stand up and show who they are, what they are about, and what God has done in their lives. As backwards as it sounds, it is the thief, and the guy who writes ugly stuff on message boards, that you should be showing your good side to and delivering a message of truth. The thief was probably absolutely desperate, and was indeed dramatic, and it is precisely for that reason someone should reach out to him and let him know what the truth is.

For the record, I know my last two posts show otherwise, but I am not advocating laying down and taking a beating from the masses.

Yesterday, I simply mentioned that Herb Jones needed $1800.00 for his mission trip to India. After service, he told me that...

April 1, 2008
Copyright 2018 Dave Milam | Powered by Eggroll Studio | All Right Reserved.
Back to top
%d bloggers like this: